A selection of the world’s most promising young drivers arrive in Melk, Austria tomorrow with their eyes firmly fixed on landing one of 10 places on the inaugural FIA Institute Young Driver Excellence Academy.

The drivers, who come from both race and rally disciplines, were nominated by their FIA-affiliated national sporting associations (ASNs) and then narrowed down to the best 18 by the FIA Institute.

Josef Newgarden (20, US), who was originally on the shortlist, has withdrawn due to racing commitments in the US, which mean he is unable to travel to Europe for FIA Institute Academy training sessions this season.

Over the first two days the drivers will be split into three groups and put through a series of driving and non-driving assessments.

On Sunday and Monday, all three groups will participate in driving assessments. Also on Sunday, the drivers will be put through their paces physically in the gym to assess fitness levels and mentally through team-building skills. Monday means psychological profiling and media skills. The final day delivers a sharp competitive edge to the shoot-out, with a Race of Champions-style qualification event in the morning and final in the afternoon.

The 10 successful drivers, who will be chosen to participate in the FIA Institute Young Driver Excellence Academy 2011, will be announced at 1800 on Tuesday.

The Selection Event and the Academy programme will be led by former Formula One star and Le Mans 24-Hour winner Alex Wurz and 2001 World Rally Champion co-driver Robert Reid.

Wurz will run the on-track activities through his Test and Training International (TTI, www.test-and-training.com) company. TTI has schooled more than 2.8 million road users in safety training. Robert Reid will lead the off-track activities via his company Elite Sports Performance (ESP www.esp-academy.com). ESP has been a training service provider to the FIA, working most recently on the Pirelli Star Driver scheme.

For the driving elements of the Selection Event, drivers will use identical race-spec BMW M3s. This part of the programme, designed by Alex Wurz, will offer an exacting and thorough examination of all areas of driving. Tests include:

• Smooth driving: drive on pre-determined sections of the racetrack while maintaining the highest possible average speed in a single high gear. The participants are not allowed to use the clutch in slower corners. This will demonstrate the driver’s ability to use the correct line while maximising the torque of the engine.

• Car control: drive as fast as possible around a track while dealing with the loss of grip and resultant sliding car. The drivers must keep the car between a set minimum and maximum speed. This will demonstrate the driver’s ability to control a skidding vehicle and maintain continuous drifts on slippery surfaces.

• Consistency: drive several laps around the racetrack reaching a minimum lap time or faster, while trying to achieve lap times as consistent as possible without any control devices such as the speedometer or rev-counter. The target is for the driver to post lap times which are within 0.5 seconds of the average.

• Driving ability: the driver will take a vehicle around a handling track, which includes dry, wet and slippery conditions. The drivers will be required to perform various braking exercises, including brake-swerve manoeuvres, and the goal is to be as fast as possible while staying within the minimum and maximum speeds at specified locations on the track.

• Acceleration, braking, coordination: the driver will tackle linked sections of the racetrack where highest possible entry, apex and exit, as well as braking-point speed are assessed. Additional elements such as the duration of braking and general braking habits will also be assessed.

• Driver competition: a straightforward, pursuit-style of competition; the drivers start at either side of the circuit and attempt to close the gap on their rival. The winner goes through to the next round, while the loser has to rely on a fastest loser mechanism in the hope of continued progress in the shoot-out.

Non-driving assessments will take place over the first two days of the Selection Event. They include:

• Interview and presentation: the drivers will have to deliver a pre-prepared 10-minute presentation to a panel consisting of representatives from the FIA Institute, ESP and TTI. This will be followed by a short question and answer session on the presentation and close with a general interview including questions from the panel regarding the driver’s goals, ambitions and opinions.

• Media: Media skills will be assessed by ESP using professional journalists who will be looking for confidence, competence and flair in their communications during the driving sessions to simulate real life on-event media.

• Behaviour in team situations: the drivers will be required to participate in tasks requiring interdependent working. The focus will be on identifying strengths in areas such as communication, interpersonal skills, competitiveness, time-management and forward planning.

• Fitness: the fitness of the drivers will be examined under a series of aerobic, strength and conditioning tests, which will be compared against ESP motorsport benchmarks.

The 10 successful drivers will be given a fully-funded year of training from the FIA Institute Young Driver Excellence Academy. Training sessions will be scheduled through the season, the first of which will run in Edinburgh later this month. Being one of the 10 will stand those drivers out from the crowd; for 2011, at least, nobody else will have access to this ground-breaking, world-class Academy.

The three-day shoot-out will take place at the Road Safety and Motorsport Training Centre in Melk, 100 kilometres west of Vienna. The 18 drivers will begin their shoot-out on Sunday at 0830 and finish at 1900. The same format is run on Monday, while Tuesday ends slightly earlier at 1800 with the announcement of the 10 successful participants. 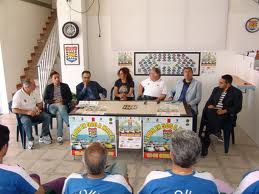