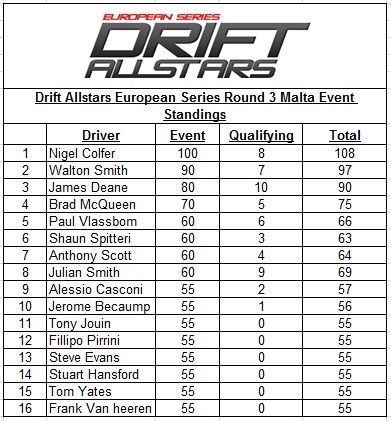 Nigel Colfer fights back and takes the win!

Ta’Qali Malta – The Drift Allstars European third tour stop on the calendar, would be the first mainland event of the 2011 season at Ta’Qali, in the centre of Malta.

This was Drift Allstars first visit to the country of Malta and the first stop on the mainland European tour. The new custom built track at Ta’Qali National Stadium Car Park, thanks to Malta Football Association, was the ultimate spectator track to display this new sport to new fans in Southern Europe. Alongside the track action, fans were kept entertained by Maximum Lock displays all day, Live DJ sets and a big vendor car show area.

The action was as hot as ever and with mid day temperatures going above 30 degrees at times, this made it a very testing time for both the drivers and cars. With great support from the MDA- Malta Drift Association, a superb event was in place.

Following two days of intense battles, it was championship leader James Deane in the LBD /Rockstar Energy PS13, who took the top spot, closely followed by Julian Smith in his Garage –D R34 skyline in its inaugural debut in competition with Drift Allstars. Second in the championship and top contender was Nigel Colfer in the Chambers Performance/Spec Clutch /Evicted 180sx. Colfer was pushing hard but could only manage 3rdplace, losing vital points to James in Qualifying. Local Maltese driver Shawn Spiteri in the Dinos Motor /Frank Rotaries FD3S, got a wild card invite after his performance, qualifying first in the Saturday MDA event. With some great driving in his first professional event, he qualified in amazing 8th position. Dutchman Paul Vlasblom made a return to the series after his 3rd place in the 2009 championship and made an immediate impact qualifying 5th in his spare car.

In the Great 8 things got very interesting.  After a close battle between James Deane and Paul Vlasblom – both being some of the most experienced and established drifters in Europe – it was James Deane in the LBD –Rockstar Energy PS13 who took the win. Nigel Colfer took the win over Anthony Scott and Walton Smith ended Shaun Spiteri’s day after an amazing debut in his first ever professional drift event. The final Great 8 battle was between Brad “Lightening” McQueen and Julian Smith. McQueen showed more speed and aggression through the course in both runs and got the advantage moving him through to the semi finals.

When it came down to the final four, things got very interesting. The top two drivers would again face off in the semi finals. Would these guys ever meet in the actual final? Both drivers were pushing as hard as they could go, entering the arena with the fastest entry speed all weekend. The battle would require a “one more time” to decide the outcome of the championship and in this battle it was Colfer who had more speed through the course edging an advantage ahead of Deane. In the other semi final a brief mistake by McQueen in the first run, signalled the end of his challenge in the semi final and Smith progressed though to another all Irish final.

In the final you could see Colfer was hungry for his first win of the year and showing this, his entry speed into this battle was even faster. With two podiums to his name in the first two events of the season and the top step of the podium within his grasp, it would take a lot to beat him. Colfer gained a significant gap in the lead run, but the Subaru of Walton smith didn’t give up in run2 and still ran a very strong run. The overall aggression and 1st run advantage gave Nigel Colfer the win.

“To win in Malta was crazy… What an amazing country and an awesome event. The weekend couldn’t have gone any better and hopefully we can keep it up for round 4 in France in 2 weeks.”

For more information and full details check out the website at www.jdmallstars.com.

Click here to view a selection of photos from the event.